The evolution of the traditional engine to newer generation, hotter running, and more fuel efficient engines has resulted in a need for fasteners with improved high temperature strength and creep resistance over carbon steels. A majority of these elevated temperature automotive fasteners are made with CarTech A-286, a popular aerospace alloy used at operating temperatures up to 700ºC (1300ºF).

Government mandates and fuel emission requirements for automobiles and trucks have, in recent years, become increasingly more stringent. In response to these regulations, OEMs have added more turbocharged engines into their vehicles. A turbocharger is an air pump, driven by exhaust gas, which pressurizes the intake. This allows more air and fuel into the cylinder, therefore increasing the horsepower of the engine. This technology has resulted in smaller, hotter running, more efficient engines that have the power and responsiveness formerly seen in engines with larger displacements. Single or dual turbocharger engines are, at times, coupled with direct injection engines which results in some of the most efficient engines manufactured today.

Due to the ability of these efficient engines to increase fuel economy and lower exhaust emissions while increasing horsepower, nearly all automotive and diesel truck manufacturers are embracing this newer technology. It is anticipated that the majority of engines produced in the future will incorporate this technology. These new, cleaner burning engines, however, operate at much higher temperatures – generally at or near 649°C (1,200°F) – therefore taxing the ability of the fasteners (fittings, bolts, shafts, studs, etc.) to provide a leak-free exhaust and a proper sealing surface. This is very important as any leak of gasses from a sealed system could disrupt the joint integrity and severely impact the very gains in efficiency that OEMs seek to obtain.

Carbon steels do not have the ability to operate in temperatures beyond 371°C (700°F) without experiencing degradation in properties. Therefore, their use in these hotter operating environments increases the chance of fastener creep. When creep occurs, it can result in a gap between the exhaust manifold and the engine block, which could cause emission system faults, reduced fuel efficiency, and an increase in gas emissions

For this reason, many automotive and truck designers have turned to aerospace-type, high temperature steel alloys such as CarTech Customet® Alloy A-286 and CarTech 286-LNi alloy for their exhaust fasteners. These alloys, as opposed to conventional carbon steels, are not compromised by temperatures of up to 704°C (1300°F) and have no loss of properties when they are returned to room temperature. They are therefore able to keep the joints intact during cycles of expansion and contraction. Figure 1 illustrates the relative strength at increasing service temperatures of various alloys used in the automotive and truck industry. 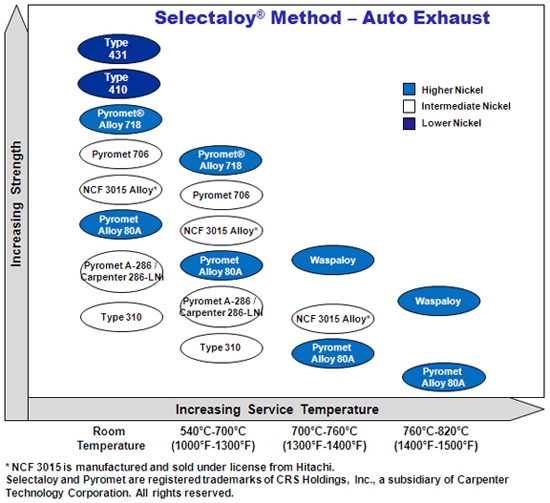 Customet A-286 has been used successfully in high temperature automotive and truck fastener applications for more than 10 years, over which time millions of fasteners have been produced using the alloy. Customet A-286, however, has a nickel content of approximately 25%, which makes it significantly more expensive than carbon steel and potentially prone to pricing volatility.

To address this cost issue, Carpenter Technology Corporation, based in Wyomissing, Pennsylvania, has developed a lower nickel alternative to Customet A-286 alloy, called CarTech 286-LNi alloy (UNS66285). CarTech 286-LNi alloy contains less nickel than CarTech Customet A-286: 19% nominal Ni in 286-LNi vs. 25.5% nominal Ni in A-286. The material has been balanced with other alloying elements to provide comparable high temperature strength and corrosion resistance to alloy A-286. The composition is 18-20% nickel, 13.5-16% chromium, 2.2-2.8% titanium and up to 2% manganese, 1% molybdenum, 1% silicon, 0.5% aluminum, 0.5% vanadium and 0.08% carbon with the balance iron. The alloy is precipitation hardenable using the same heat treat procedures commonly used for Customet A-286. The mechanical properties after heat treatment are also comparable to Customet A-286. Table 1 and Table 2 show a direct comparison of A-286 and Carpenter 286-LNi tension and Charpy impact properties after solution treat and age.

The relative corrosion resistance of CarTech A-286 alloy and CarTech 286-LNi is documented in Table 3.

Table 3: Corrosion resistance comparison of Carpenter 286-LNi and A-286 alloy

CarTech 286-LNi can be produced using the double melt process traditionally used to melt CarTech Customet A-286. Additionally, to further reduce the cost of the alloy, Carpenter has developed a single melt process for CarTech 286-LNi. This, along with the lower nickel content, results in cost savings to users of the newer alloy.

Produced as a wire product, CarTech 286-LNi alloy can be coated with any of Carpenter’s available portfolio of precoat, soap drawn, CarTech KnightCote® coating and/or copper combinations. It could be considered for any application for which CarTech Customet A-286 is currently being used, including automotive and truck turbocharger bolts, turbocharger studs, turbocharger shafts, EGR shafts, catalytic converter take down bolts, automotive exhaust manifold bolts and studs and truck exhaust bolts and studs.

Both automotive and truck OEMs and major fastener manufacturers have evaluated CarTech 286-LNi alloy, and their tests results to date have found that auto and truck fasteners made with CarTech 286-LNi have comparable capabilities to those made with CarTech Customet A-286. CarTech286-LNi alloy has been added to the ASTM-A-453 rev 10 “Standard Specification for High Temperature Bolting with Expansion Coefficients Comparable to Austenitic Stainless Steels” as grade 668 or UNS66285.