All austenitic stainless steels are paramagnetic (nonmagnetic) in the fully austenitic condition as occurs in well-annealed alloys. The DC magnetic permeabilities range from 1.003 to 1.005 when measured at magnetizing forces of 200 oersteds (16k A/m). The permeability increases with cold work due to deformation-induced martensite, a ferromagnetic phase. For certain grades such as Types 302 and 304, the increase in magnetic permeability can be appreciable, resulting in these grades being weakly ferromagnetic in the heavily cold-worked condition. The susceptibility of a particular grade to becoming ferromagnetic when heavily cold worked depends on the stability of the austenite, which, in turn, depends on chemical composition and homogeneity. This is described in the article "Stability of Austenite in Stainless Steels" by C. B. Post and W. S. Eberly, published in "Transactions of the American Society for Metals," volume 39, (1947), pages 868 to 890.

The effect of cold work on magnetic permeability is illustrated for several austenitic stainless steels in Figure 1. The relationship between ultimate tensile strength and magnetic permeability is shown in Figure 2. The rise in permeability correlates well with the increase in tensile strength or work-hardening behavior, which is another measure of austenite stability. The differing performance between grades is a reflection of their composition. In particular, nickel increases austenite stability, thereby decreasing the work-hardening rate and the rate of increase of magnetic permeability. Consequently, the higher nickel grades, such as Carpenter Stainless No. 10 (Type 384), exhibit lower magnetic permeabilities than the lower nickel grades such as Project 70+® Type 304/304L when cold worked in equivalent amounts. The high-manganese, high-nitrogen alloys, such as Carpenter 18Cr-2Ni-12Mn,are also noted for maintaining low permeability after heavy deformation.

The magnetic permeabilities achievable in austenitic stainless steels are very low compared with conventional magnetic materials such as silicon-iron alloys. Therefore, their non-magnetic behavior is more of a concern. Certain uses such as housings and components for magnetic detection equipment used for security, measuring and control purposes require that the steel be nonmagnetic. That is because the presence of even weakly ferromagnetic parts can adversely affect performance. Unless the austenitic stainless steel parts are used in the annealed condition and are not subjected to deformation during use, a higher nickel grade would be a prudent choice assuming it offered the appropriate corrosion resistance and strength.

For a given grade, the magnetic permeability can vary significantly depending on the chemistry and degree of cold work of the steel. Often a particular lot of an "unstable" grade such as Type 304 can perform satisfactorily. If the magnetic permeability of an austenitic stainless steel is of particular concern, it can be measured by relatively simple means as described in ASTM Standard Method A342.

Ferritic stainless steels are ferromagnetic and have been used as soft magnetic components such as solenoid cores and pole pieces. Although their magnetic properties are not generally as good as conventional soft magnetic alloys, they are successfully used for magnetic components which must withstand corrosive environments. As such, they offer a cost-effective alternative to plated iron and silicon-iron components. In addition, the relatively high electrical resistivity of ferritic stainless steels has resulted in superior AC performance. 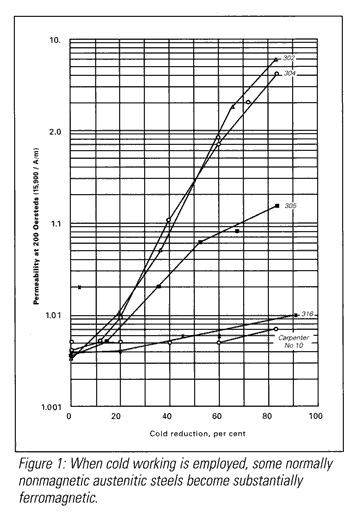 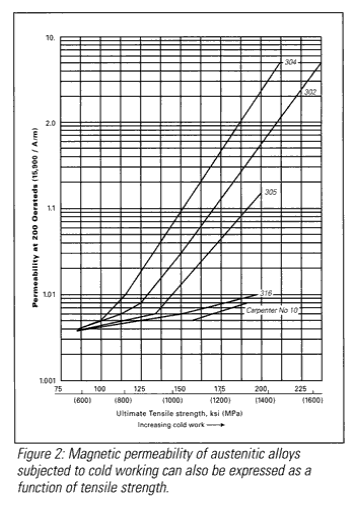 Even if a ferritic stainless steel is not being used as a magnetic component, its magnetic behavior can be of significance to fabrication and use. Annealed ferritic stainless steels exhibit soft magnetic behavior, which means they do not have the ability to attract other magnetic objects when removed from an externally applied magnetic field. Cold working, however, increases the coercive force (Hc) of these steels changing their behavior from that of a soft magnet to that of a weak permanent magnet. If parts of cold worked ferritic stainless steel are exposed to a strong magnetic field such as occurs in magnetic particle inspection, the parts can be permanently magnetized and, therefore, able to attract other ferromagnetic objects. Apart from possibly causing handling problems, the parts would be able to attract bits of iron or steel which will, if not removed, impair corrosion resistance. It is therefore prudent to either electrically or thermally demagnetize such parts if they have been subjected to a strong magnetic field during fabrication. Magnetic properties of some ferritic stainless steels are listed in Table 1.

All martensitic and most precipitation hardenable stainless steels are ferromagnetic. Due to the stresses induced by the hardening transformation, these grades exhibit permanent magnetic properties if magnetized in the hardened condition. For a given grade, the coercive force tends to increase with increasing hardness, rendering these alloys more difficult to demagnetize. Although not used as permanent magnets to any significant extent, the previously mentioned potential difficulties of hardened ferritic stainless steels also apply to these steels. Magnetic properties of some martensitic steels are also shown in Table 1. 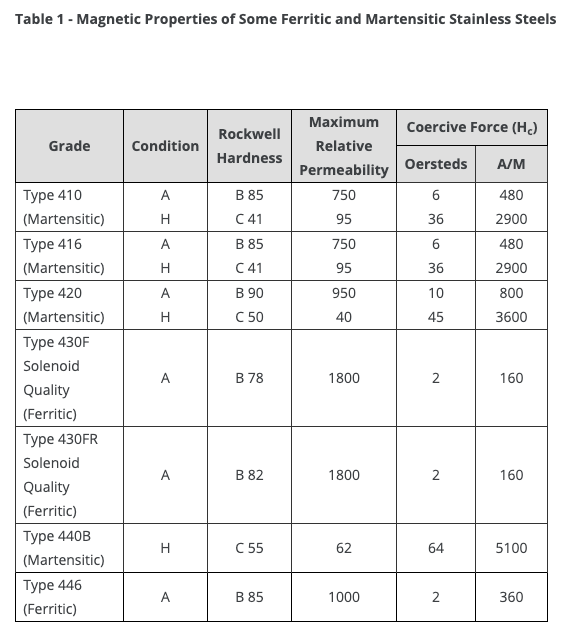