The Uses for Invar Continue to Multiply

After 100 Years, The Uses for Invar Continue to Multiply

The metals world in 1996 observed the centennial of the discovery of the low expansion alloy known as Invar (UNS K93600). This remarkable alloy has been so important to scientific advancement that it earned the Nobel Prize in 1920 for its inventor, Charles-Edouard Guillaume, the first and only scientist in history to be so honored for a metallurgical achievement.

Still exhibiting the "Invar Effect" that defies understanding, Invar has bred an entire family of low expansion, nickel-iron alloys that are used today in a wide variety of both commonplace and high technology applications. Commercial uses have proliferated in fields as diverse as semiconductors, television, information technology, aerospace and cryogenic transport.

Guillaume, employed by the International Bureau of Weights and Measures, was looking in 1896 for a metal for geodesic tapes and wires that would not change in length when exposed to temperature variations. In addition, he wanted a cost-effective material for reference bars of perfectly defined length that could be used as secondary standards throughout the world.

He had many heats of nickel-iron alloys melted, handicapped often by feed stock that was contaminated. In the process, experimenting with nickel contents of 30% to 60%, Guillaume discovered that the coefficient of expansion at room temperature was lowest at a nickel level of 36%.

With 36% nickel, in fact, the alloy exhibited the least amount of thermal expansion of any alloy known. Since Guillaume considered the expansion of his new alloy "invariable", it eventually became known as Invar.

Guillaume published a graph similar to Fig. 1 visualizing the unique thermal expansion behavior of an "Invar-Effect" alloy. The expansion characteristic of these nickel-iron alloys is broadly determined by ferromagnetism.

Above the Curie temperature, 36% nickel and other nickel-iron alloys expand at a high rate because they are no longer ferromagnetic. A number of theories have been proposed to explain this phenomenon. Although these theories have provided some insight, the mechanism is not yet sufficiently understood.

Once the 36% nickel and its companion nickel-iron alloys were discovered, it didn't take long to find applications that could utilize their low thermal expansivity. Surveying tapes and wires, as well as pendulums for grandfather clocks became important early applications. Nickel-iron alloys were substituted for platinum for glass sealing wire at great cost savings in the 1920's. They also were used in light bulbs and electronic vacuum tubes for radios.

Uses expanded further in the 1930's. Nickel-iron alloys were used as one of the bimetals in thermostats for temperature control. A copper-coated 42% nickel-balance iron alloy was being used in the lead-in seals of incandescent lights. A 56% nickel alloy was used to make measuring devices for testing gauges and machine parts.

Applications continued to spread in the prosperous 1950's and 1960's. The 36% nickel and other nickel-iron alloys were needed for low expansion components in bimetals for circuit breakers, motor controls, TV temperature compensating springs, appliance and heater thermostats, aerospace and automotive controls, heating and air conditioning, etc.

Glass-to-metal and ceramic-to-metal seals were in great demand. Since several of the "Invar-Effect" nickel-iron alloys had thermal characteristics similar to those of glass and ceramics, they were the natural choice for such applications. They were also used for the sealing needs of semi-conductors and microprocessors. These include pin feed-throughs, packaging and lid seals.

The demand for thermostat metals continued to grow in the 1980's and 1990's. The 36% nickel alloy has been found quite useful for containers used to transport liquid natural gas on tankers. The alloy minimizes cryogenic shrinkage.

Newer applications use nickel-iron alloys for structural components in precision laser and optical measuring systems, and wave guide tubes. These alloys have been used in microscopes, in support systems for giant mirrors in telescopes and in a variety of scientific instruments requiring mounted lenses.

36% nickel-balance iron alloys have been used for composite molds by the aerospace industry. New generation aircraft, in particular, need 36% nickel-balance iron alloys for molds that will hold tight dimensional tolerances while advanced composites are cured at moderately high temperatures. The "Invar-Effect" family of alloys, in fact, is helping to raise modern science to higher levels with applications in orbiting satellites, lasers, ring laser gyroscopes and a host of high-tech applications.

Nature of Expansivity As shown in Fig. 1, the thermal expansion curve for "Invar-Effect" alloys consists of a low expansivity portion and a high expansivity portion. Below their Curie Temperature, these alloys are magnetic and their expansivities are anomalously low. Above it, they expand at a normal, high rate. This high rate extends to the melting point of the alloy. It can be noticed that there is a transition range between the low expansion and high expansion components. This transition is evidently related to the deterioration of ferromagnetism as the alloy approaches the Curie Temperature

In his early investigations, Guillaume learned how variations in nickel content affect the coefficient of expansion of the nickel-iron alloys. He found that expansion reached a minimum with 36% nickel (Fig. 2), and that on either side of this value the expansion coefficient increased dramatically.

Alloys with nominally less than 36% nickel are seldom used for controlled expansion applications primarily for two reasons: (a) these alloys can transform to martensite, which drastically increases the expansivity, and (b) they have low Curie Temperatures, which reduce the temperature range over which they may be used. Therefore, the alloys with 36% or more nickel are usually considered for controlled expansion applications.

The 36% nickel alloy's low coefficient of expansion, along with its off-the-shelf availability, make it one of the most commonly used materials for applications requiring low expansivity. But, depending on the temperature range of interest, it may not be entirely suitable for some applications. Although it exhibits the lowest thermal expansivity, it also has the lowest Curie Temperature. That limits its useful temperature range.

For applications around ambient temperature requiring the lowest expansivity, the 36% nickel is the obvious choice. It has been the most widely used nickel-iron alloy in applications such as electronic devices where dimensional changes due to temperature must be minimal, for structural members in precision optical measuring devices, and as the low expansion side in bimetal thermostats.

For certain applications, however, other alloys in the Invar family may be more suitable. In each case, alloy selection should take into account the temperature range for the intended application, as well as the coefficient of expansion desired over that range. The relative expansion rates for the "Invar-Effect" alloys are shown in Fig. 3.

Two alloys in this family (Fig. 4) have been found suitable for unique low expansion requirements. FCarpenter Technology Free-Cut Invar "36"® alloy (UNS K93050), with a slight increase in expansion properties, has been shown to offer improved machinability for applications where high parts productivity is important. This alloy has been used for aircraft controls and a variety of electronic devices

The second alloy - Carpenter Technology Super Invar "32-5" - is an iron-nickel-cobalt alloy which exhibits approximately one half the thermal of Carpenter Technology Invar "36"® alloy at or near room temperature. It has been used for structural components and supports for optical and laser instruments. 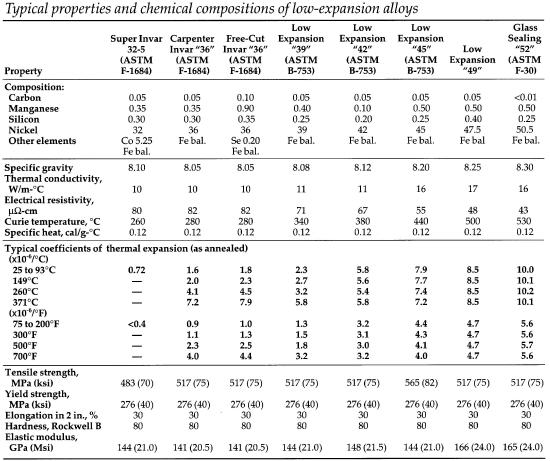 Fig. 4 - Typical properties and chemical composition of the Invar family of alloys.

Any one of four other nickel-iron alloys may be particularly suitable for service in higher temperature ranges. For example, Low Expansion "39" alloy (ASTM B-753) has a useful low thermal expansivity extending to approximately 250°C (482°F). It has been used as the low expansion element in thermostat bimetal products.

Carpenter Technology Glass Sealing 42 alloy, sometimes known as 42 alloy (ASTM F-30), has been commonly used for hermetic sealing to certain glasses. It is also has been used for high reliability ceramic- and plastic-sealed semiconductor packages.

Carpenter Technology Low Expansion "42"® thermostat alloy (ASTM B-753) has a virtually constant low rate of thermal expansion at temperatures up to about 350°C (662°F), while Low Expansion "45" alloy (ASTM B-753) has a relatively constant rate of thermal expansion to about 450°C (842°F). Both metals have been used in thermostats and thermoswitches. The thermal expansivity of the higher-nickel alloy approximates the thermal expansivity of alumina ceramics over certain temperature ranges. The alloy in this family with the highest nickel content, Carpenter Technology Glass Sealing "52" alloy (ASTM F-30) has been used for glass sealing of certain "soft" glasses.

The entire group of "Invar-Effect" nickel-iron alloys machine similar to, but not as well as a Carpenter Technology 316 austenitic stainless steel. They are readily machinable, although they are soft and do produce gummy chips. Therefore, large, sharp and rigidly supported tooling is recommended, with slower speeds. Where high productivity and good surface finish are important, a big edge goes to the Carpenter Technology Free-Cut Invar "36" alloy, the free-machining alloy variation.

All of the alloys in the family are very ductile, thus readily cold headed and formed. Stamping from cold-rolled strip is easily accomplished. Parts may be deep drawn from properly annealed strip.

Fabrication does add stresses which, unrelieved, can change the thermal expansion behavior. When that happens, parts placed in service as fabricated may not meet design requirements. To prevent such incident, annealing and stress relieving thermal treatments may be needed to promote structural uniformity and dimensional stability.

After severe forming, bending and machining, relief of stresses induced by these operations can be accomplished by annealing at temperatures of 760°C (1400°F) to 980°C (1800°F) long enough to thoroughly heat through the section. However, nickel-iron alloys will oxidize readily at these high temperatures.

When annealing cannot be done in a non-oxidizing atmosphere (vacuum, dry hydrogen, dissociated ammonia, argon, etc.), sufficient material must be present to allow cleaning by light grinding, pickling, etc., after annealing. For sections having light finishing cuts or grinding performed after annealing, stress relief is accomplished by heating to 315°C (600°F) to 425°C (800°F) long enough to uniformly heat through the work piece.

Invar is a critical alloy that has endured for more than a century. It is in a league of its own, having grown in importance over the years and given life to a stream of new technologies.

Collectively, this family of nickel-iron alloys has been found suitable for a host of applications that require different expansivities over a broad temperature range. Because of the widespread and growing demand for their special properties, these alloys seem likely to make an even greater contribution to modern science as they begin their second century on Earth.