It's not easy for the careful designer to select a soft magnetic alloy that is best for an application, and also priced right. Special care must be exercised to find the necessary properties and characteristics, without over-specifying.

Many designers find the selection process confusing and tedious. The information needed to make a decision is often not in one place. Even when the criteria are available, comparing several candidate alloys still can be a challenge. Soft magnetic alloys are materials that can be easily magnetized - thus exhibiting high permeability - and just as easily demagnetized. In general, high permeability allows the design of smaller, more efficient components.

Several factors have a bearing on the soft magnetic alloy choice. One external factor is corrosion resistance, which is essential for devices exposed to weather or other corrosive environments.

The most important magnetic criteria to consider, however, are the relative performance characteristics known as sensitivity (permeability) and strength (flux density), along with the respective cost of the alloys considered. A special matrix (Fig. 1) has been developed that compares these key values.

This matrix can serve as an initial guide for the designer in selecting which groups of alloys to explore for a specific application. The groups include currently available nickel-iron alloys, silicon iron alloys, iron-base alloys, iron-cobalt alloys, and ferritic stainless steels.

The chart compares the relative permeability of alloys in each family. Note that the nickel-iron family has superlative permeability, far exceeding that of other alloys. This chart can be useful in making an alloy choice provided that the designer is certain to investigate specific values.

The ferritic stainless steels, used largely for solenoids and fuel injectors, have the lowest magnetic permeability of the five alloy groups. Their relative permeability (as well as strength and cost) is shown by color code with that of the other alloy families in Fig. 1. 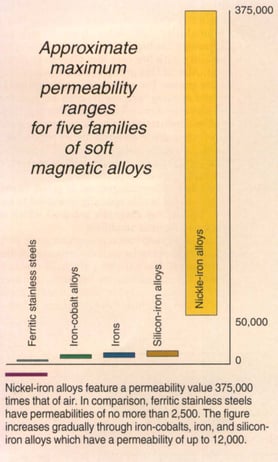 The iron-cobalt alloys, with slightly improved permeability, generally have been preferred for their high magnetic saturation or flux density. This property maximizes the amount of magnetism available for magnetic circuits.

Alloys in this family have been used most frequently for aerospace motor and generator laminations, electromagnets, high performance transformers, and magnetic bearings.

All five of the iron-cobalt alloys listed offer nearly identical magnetic saturation. Hiperco® 27 possesses the highest degree of ductility and toughness in the iron-cobalt family. Hiperco® 27 HS offers higher yield strength and is specially formulated to be forged into desired shapes.

Hiperco 50, is similar in composition to Hiperco 50A, but with a small addition of niobium. This addition provides grain refinement which gives the material higher mechanical strength with only a slight sacrifice in magnetic properties.

Hiperco® 50 HS, containing more niobium, offers an even higher yield strength with only moderate core loss. This grade and Hiperco 50 have been used to withstand the high stresses encountered in high-speed motors and generators.

The irons, or electrical irons, are low carbon alloys that offer a little more magnetic permeability than the iron-cobalt alloys. They have been used in relays, solenoids, and magnets in vacuum equipment, particularly in direct current magnetic field applications.

Basic electrical irons are generally electric arc melted to provide good direct current soft magnetic properties. Electrical Iron-FM offers improved machinability for components that have to be produced in large quantities. Consumet Electrical Iron is double melted to reduce porosity and internal defects. It has been used to make parts for electromagnets and vacuum equipment.

The addition of silicon to low-carbon iron produces a family of silicon iron alloys, with still higher magnetic permeability. These grades all have more hardness and electrical resistivity than the irons. They have been found suitable for alternating magnetic field applications such as relays and solenoids.

Silicon Core Iron A has magnetic properties like those of electrical iron. However, it has electrical resistivity of 25

Silicon Core Iron B, with electrical resistivity of 40

The nickel-iron alloys possess the highest permeability by far of all the soft magnetic alloys. They generally have been used in the most discerning, often scientific applications where parts are intricately involved and frequently where low weight, limited space, and/or miniaturization are important factors.

For purposes of definition, this large family of alloys may be divided into three groups, based primarily on their nickel content:

The first group consists of the alloys with nominally 30% nickel. Four Temperature Compensator alloys in this group offer magnetic permeability that decreases from pre-determined levels at a controlled rate, with increase in temperature. They have been used as shunt materials in voltage regulators, speedometers, tachometers, and watt-hour meters.

Included in the second group are four alloys with nominally 49% nickel content. High Permeability 49 has high initial and maximum permeability with low core loss after suggested heat treatment. It has been used for transformers, motors, magnetic shielding, solenoid cores, and other control devices.

The rotor grade variation of this alloy has been used in motor laminations, relays, shielding, and rotating components such as resolvers and servo-synchros whose magnetic properties must be nondirectional. The transformer grade of the same alloy is specially processed to produce higher permeabilities at low magnetizing forces in the directions parallel to the rolling direction. This grade has been used primarily in transformer laminations and tape toroids.

Hy-Ra 49® Alloy is a specially processed alloy capable of exhibiting square loop magnetic behavior after suggested heat treatment. It has been used frequently in magnetic amplifiers.

The third group of alloys in the highest-permeability family consists of those materials with nominally 80% nickel content. HyMu 77 Alloy, containing 77% nickel, has been used for certain magnetic shielding applications. It has better cold-formability than other alloys in the group with more nickel. A companion grade, HyMu 77 Alloy Plus, has been used successfully for GFCI cores.

HyMu 80 is a nonoriented, 80% nickel-iron-molybdenum alloy with extremely high initial permeability and maximum permeability with minimum hysteresis loss. It has been used primarily for transformer cores, magnetic shielding, ground fault circuit interrupters, tape-wound toroids, and laminations operating at very low magnetic field strengths. The alloy has been useful for miniature transformers and other applications where small size and low weight are important.

Hipernom® Alloy, with the same analysis as HyMu 80, is provided with the correct temper to enable users to perform a variety of cold forming operations such as roll forming, spinning, and deep drawing. It is available in sheet form and has been used primarily in magnetic shielding applications.

In most applications, HyMu 80 Mark II Alloy provides magnetic permeabilities that are similar to those of HyMu 80. Its composition allows flexibility in heat treatment that is sometimes advantageous. The Mark II grade has been used for modem transformer laminations, GFCI cores, recording head laminations, and tape toroids.

HyMu 80 can be heat treated to show very high initial permeabilities and maximum permeabilities. It exhibits minimum AC core losses at low magnetic flux densities. The alloy is generally produced in strip form at thicknesses less than 0.008" (0.02 mm). It has been used typically for tape-wound toroids and laminations for tape heads.

A companion grade, HyMu 800 A, offers suitable magnetic characteristics for recording head laminations, as well as increased resistance to abrasion wear. It is designed to provide longer head life than obtainable with the usual permalloy materials.

For reference at a glance, Fig. 3 shows all of the alloys discussed in this article, color-coded to match their appearance in the basic selection matrix. The most typical applications for each alloy or alloy family are indicated to the left. 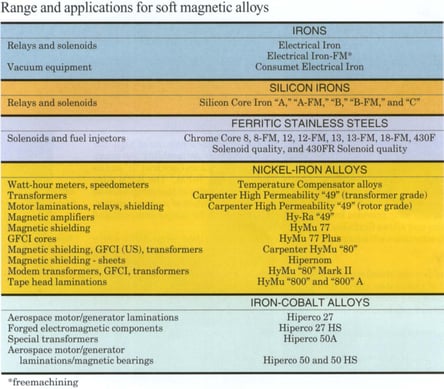 An alloy with high flux density or strength allows the development of a strong magnetic field. This characteristic, also known as high saturation induction, enables the designer to maximize the force that can be applied in an electromechanical part. Alloys of this type have been used for high-performance motors and generators.

For easy comparison, the chart in Fig. 4 shows approximately how flux density increases through the five alloy families from the nickel-iron alloys to the iron-cobalt alloys.

Moving up the selection matrix, the ferritic stainless steels show somewhat higher flux density than the nickel-iron alloys. Their strength is still relatively low, however, because the chromium content in these grades (8% to 18%) tends to dilute the effect of the iron.

To select the most suitable ferritic stainless for a potential application like a solenoid or fuel injector, the materials specifier must first determine which property - flux density or corrosion resistance - is more important, and to what degree.

The silicon iron alloys offer a combination of high flux density, along with superior magnetic permeability. Engineers who have used these materials for relays and solenoids can design parts and components more efficiently because less power input is required.

Silicon Core Iron B and  Silicon Core Iron B-FM by far have been the most popular choices in this group because they offer a well-balanced combination of magnetic properties and, in the case of the FM version, free machinability for components that have to be produced in large quantities.

The irons, with good permeability and higher flux density than the silicon iron alloys, have been used most often in DC applications. They have been found most commonly in relays, solenoids, and vacuum equipment.

For the highest flux density, the iron-cobalt alloys are the undisputed leaders. The alloys in this family allow the designer of generators to get more electrical energy per unit weight than any other soft magnetic alloy. That can translate into significant savings in weight and size.

All of the iron-cobalt alloys have high saturation flux density, which can be reached quickly and easily. With their high saturation, iron-cobalt alloys have been preferred for components in aircraft and other electrical generators, and for levitating devices such as magnetic bearings. The materials in this family have been specified often for critical, leading edge applications.

Cost, which is always important to the designer, can depend on many variables. One is the current price of raw materials, such as nickel and cobalt. While the costs of these two alloying elements are at relatively low levels at the time of this writing, their costs have been known to swing widely and abruptly.

The alloy form required can affect costs. Bar products cost less to produce than, for example, strip that is to be used for laminations. More production steps and controls are involved in making strip.

Also to be considered is the well-known law of supply and demand which governs the costs of everyone doing business.

That said, however, Carpenter has analyzed costs long term and, based on actual experience, has projected average costs of the five families of magnetic alloys insofar as they relate to each other. Although it is not possible to present in actual dollars and cents, the comparative costs are presented in the Fig. 1 selection matrix from the least expensive, iron, to the most expensive, iron-cobalt alloys.

With a working knowledge of comparative costs, the designer can select the alloy with the characteristics most suited for the application, without overspecifying.

Selecting the right magnetic alloy for a product application does not have to be intimidating. The designer first needs to find the candidate alloy that best combines the characteristics required, then select the lowest cost alloy that will meet those requirements.

To reverse the process and select an alloy that may or may not do the job, in the interest of saving upfront material costs, may put the job at risk at a potential cost many times more than the initial alloy investment.

Soft magnetic alloys, it should be noted also, are made by means of premium melting practice and specialized processing to achieve optimum properties. The performance of these alloys depends not only on how they are made but often on the knowledge of how they are to be used.

It can be productive, therefore, for the designer to consult with the alloy supplier and explain his/her specialized needs. Mill processing can be tailored to provide certain critical magnetic properties, and chemical compositions can be adjusted to make some alloys more suitable for certain methods of fabrication.